What The Hail? Mitigating Hail Damage on Large Scale Solar 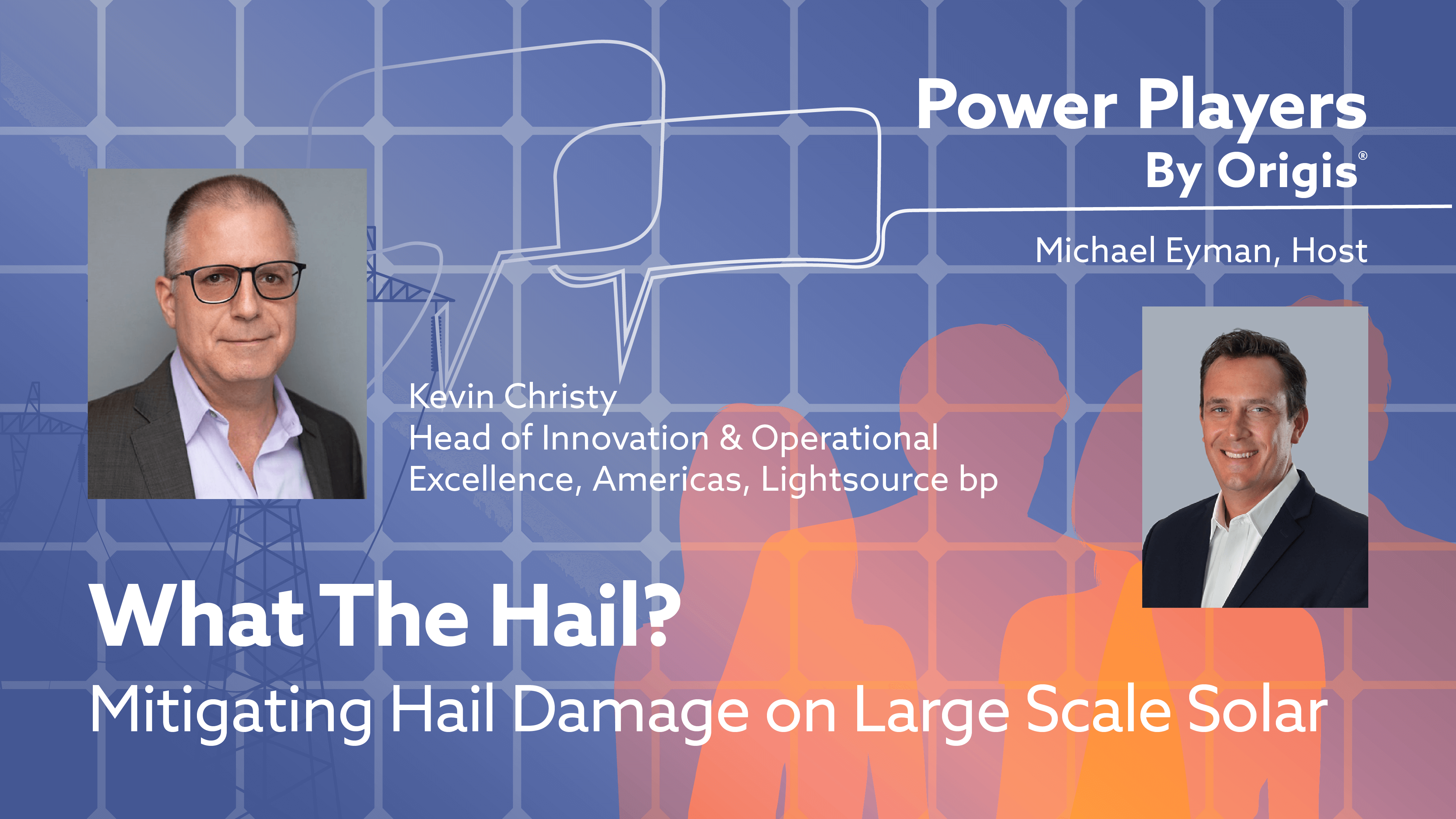 In October 2021, solar industry veteran Kevin Christy put out a challenge for the industry to increase collaboration in solar hail damage mitigation: “It’s become increasingly clear that extreme weather, such as severe hailstorms, has the potential to drag down both clean energy generation at solar farms and stakeholder returns.” In this segment, Power Players by Origis® talks with Kevin Christy, Head of Innovation & Operational Excellence in the Americas for global project developer Lightsource bp. He joins Michael Eyman to talk about his journey to rally the industry around more effective gale and hail risk mitigation measures for large scale solar and the technologies that will help protect our clean energy assets.

Michael Eyman brings more than 20 years of leadership and operations experience to Origis Services and as Managing Director is responsible for its rapidly growing solar and energy storage portfolio.

Insurance Costs Have Risen, But Could Decrease with the Right Data

Solar once enjoyed simpler and less expensive insurance products, often all-risk policies with one deductible and one coverage limit. But the solar industry has seen major changes, including more restrictive terms and prices climbing 20-25% year over year. Kevin Christy explains what happened: “What fundamentally changed in 2020 is—coming out of a number of natural catastrophe events in 2018-19, not just hail, but flood and fire—experiences on solar plants were all not great. . . So, we’re in what folks in the industry call a hard market. And what that’s looked like for hail coverage, in particular, is separate deductibles and separate coverage limits.”

Although Christy expects this trend to continue as weather events continue to surprise us, he has a plan to bring insurance costs back down over time. Over the last couple years, he’s implemented a hail mitigation strategy across 100% of Lightsource bp’s solar assets he believes will prove to insurers solar can have lower risks associated with natural catastrophes. Lower rates, however, are still a way in the future.

“The feedback we received on our program from insurers was, ‘Show us two or three years of preventing hail damage, and then we’ll give you credit,’ as opposed to just being able to look at the process and procedure and go, ‘You have a mitigation strategy in place that reduces our risk. And we recognize that, and here’s your lower premium, your lower deductible, your higher coverage limit.’ We’re still working towards this vision, and it might take a bit.”

So far, Lightsource bp’s hail mitigation strategy has made remarkable progress. In the last two years, their solar assets have experienced no hail damage, and within the last year and couple of months, they’ve successfully sent 70 dispatches in anticipation of hail. The standard Christy uses is a “zero false negative” system, in which every hail event is accurately predicted and mitigated by Lightsource bp and its O&M partners.

When a possible hail event is anticipated, Lightsource bp sends a dispatch to stow the panels in a predetermined position, as Christy explains:

“It’s widely accepted knowledge in the industry right now that the way you mitigate for hail is you tilt your modules to the maximum tilt that they’ll go to. And you basically have to pick your poison, whether it’s east or west. Some manufacturers have guidance on how to deal with that. Others don’t care. You can do it east or west. But once you pick your poison, the strike force is just going to be a function of one-half mass times velocity squared . . . of the hailstone coming down to hit your module, right? And it’s going to be a combination of how much force gets absorbed by the module versus how much gets deflected off it. And the higher the angle, hopefully, if the hailstone’s coming straight down, then you’ll deflect up to two-thirds of the energy in that hailstone.”

For the first couple years of the hail strategy, Lightsource bp sent manual dispatches to stow modules. This is soon to change, however, as Christy and his team have developed auto-stow capabilities currently being tested across Lightsource bp facilities. This automation will allow instant communication with module trackers and consistent coordination with O&M partners and on-site staff, particularly for crew safety.

Resources Anyone Can Use to Better Anticipate the Weather

While Lightsource bp has carefully planned and invested in their hail mitigation system, Christy says there are tools out there any asset owners can use to monitor natural catastrophes.

First and foremost, Christy trusts the NOAA/National Weather Service’s SPC website: “the Storm Prediction Center has a website that has all of the day’s concerns in it. And you can pick the convective outlook. It’s called the ‘Day 1 Convective Outlook.’ And this is what talks about the National Weather Service’s view on severe thunderstorm risk across the United States. And you can filter that by hail risk in that tool.” An alternative to the SPC is Weather.com. As Christy mentions, “both of those tools are free. You can have an effective weather monitoring program with just those two things.”

For more sophisticated tracking automation, Lightsource bp also uses insight from DTN, which provides algorithms to predict storm paths. Other companies with similar services include INDJI and AnythingWeather. The weather monitoring tools are there, and continue to evolve, but the trick is to act on the insight consistently and efficiently, and to have processes in place to quickly coordinate with service providers.

When asked to summarize his main takeaway, Christy’s advice is clear: “All I would say is you have to have a program designed to be repeatable, scalable, and reliable. And we are not yet to the point where we believe we have a fully automated process, so we continue to have people monitoring, and will continue to have people monitoring this work, unless and until we get to the point where we feel the process the people do can be reduced to an algorithm itself. And until we get to that point, I just don’t think there’s any substitute for having people directly involved in it.” So far, Lightsource bp’s hail mitigation program is the gold standard in the industry and may soon convince insurers to create policies for solar assets calibrated to risk and mitigation.

We’d like to thank our guest Kevin Christy and Power Players host Michael Eyman for generously sharing their experience and expertise of utility-scale hail mitigation.