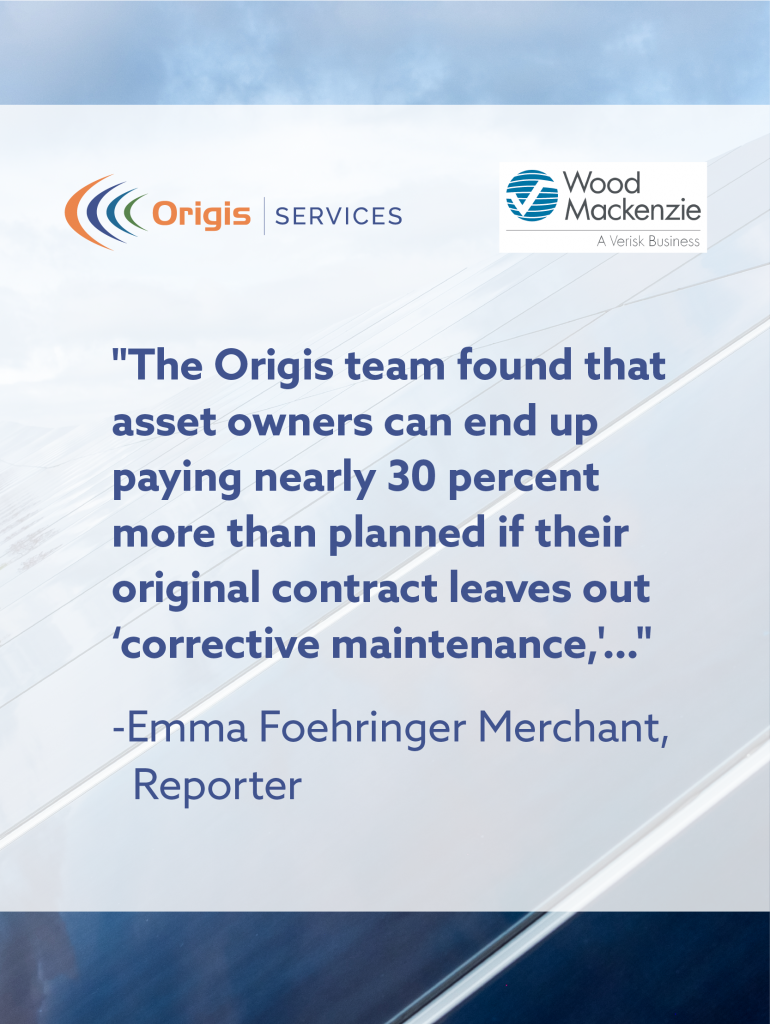 “Prices for utility-scale solar operations and maintenance contracts have dropped across the globe in recent years, driven by competitive auctions and fewer services being provided. But prices at the bottom of the range (approximately $3 to $5 per kilowatt per year) are not without their drawbacks, experts say.

Cutting corners on the full ‘scope of service’ contract, which includes site maintenance such as vegetation management and equipment checks, often leads to higher overall costs over the course a project’s lifetime, according to new research published by kWh Analytics and conducted separately by Wood Mackenzie and Origis Services, a unit of solar developer Origis Energy that provides O&M for internal projects and other owners,” wrote Merchant.

Origis Services analyzed data from a total of over two gigawatts of utility scale solar and specifically the hours spent on corrective maintenance for 75 MW and 150 MW systems.

Combined with industry standard time studies and pricing models, the study demonstrated including roughly 70% of corrective maintenance into the annual service fee is the most effective way to reduce overall O&M costs for the asset owner.

“The Origis team found that asset owners can end up paying nearly 30 percent more than planned if their original contract leaves out ‘corrective maintenance,’ which includes repairing and replacing faulty equipment such as inverters and modules, wrote Merchant.

Including corrective maintenance in the scope of service reduces the exposure to high-priced, dispatched services and provides additional benefits of dedicated plant personnel.  This strategy decreases the overall cost of O&M for asset owners by up to 28% or more and enhances the service-model stability of O&M providers, thus reducing the overall cost of O&M.

As reported by GTM, the Wood Mackenzie analysis came to the same conclusion:

Leila Garcia da Fonseca, a principal analyst at WoodMac, agreed that including [vegetation management, corrective maintenance and module cleaning] in the scope-of-service contract is likely to be cheaper over time. An all-in contract also may come with a warranty stating that the servicer will guarantee a project’s functioning at a certain level, while a la carte options usually do not.

“It makes sense for asset owners just to go with a full wrap [contract],” said Garcia da Fonseca. “In the long term…they’re going to incur [fewer] expenses than doing [it] ad hoc.”