How AI and Data Science is Shaping Solar O&M 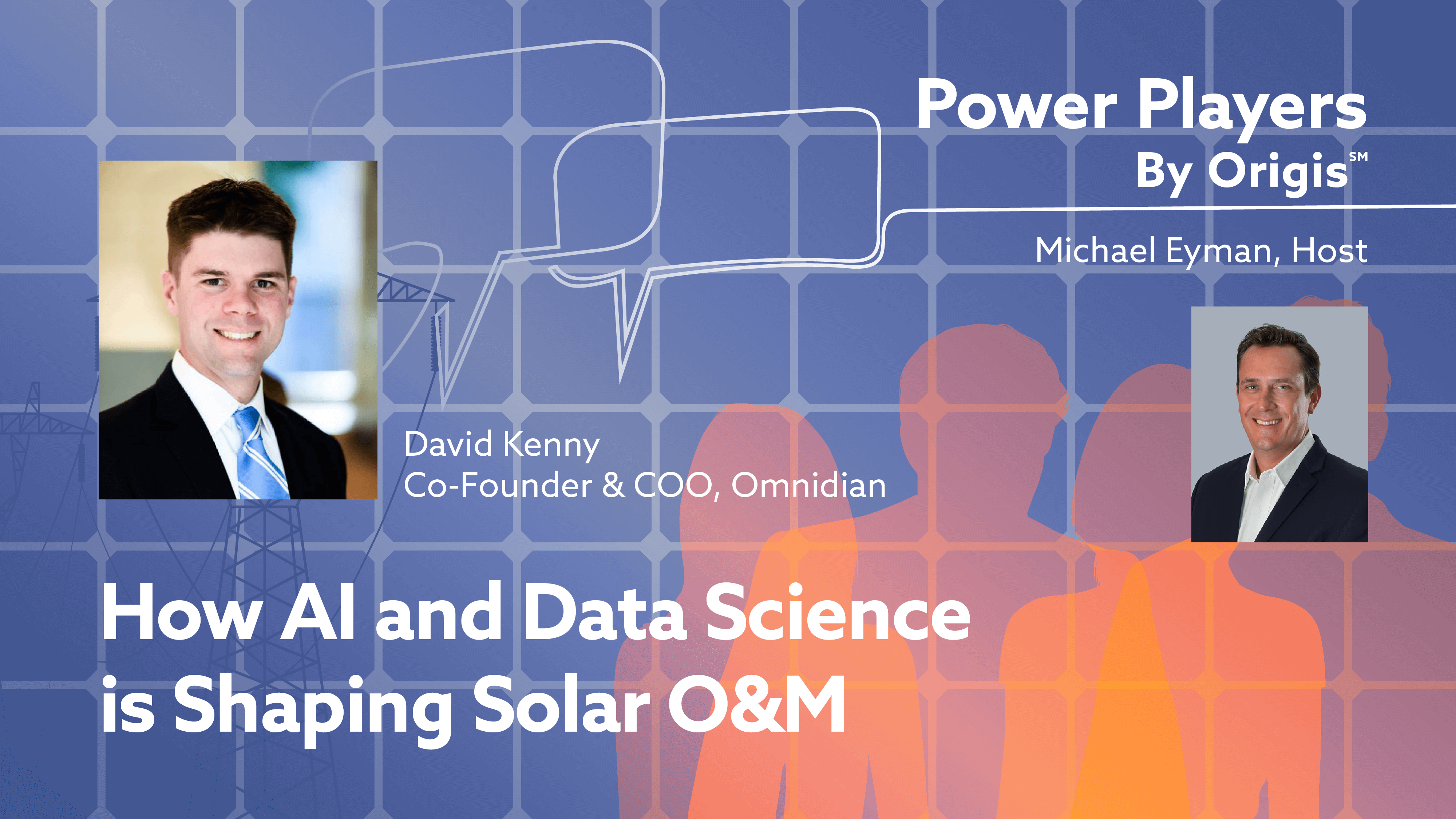 The solar operations and maintenance space is ripe for technological advancement. Moving past drones and satellite captured performance information, the industry is adapting a host of applications to ensure the nation’s clean energy assets perform as expected despite unpredictable climates and within more complex policy structures. In Episode 11 of Power Players by Origis, host Michael Eyman discusses machine learning, AI, remote analytic tools, and other advances with one of the industry’s long-standing leaders, David Kenny, Co-Founder and COO of Omnidian.

A Stanford University alumni with a MS & BS in Mechanical Engineering, David Kenny has a deep background in solar operations. Before co-founding Omnidian, Dave was Senior Director at Sunrun, managing and leading the second largest leased residential fleet in the world. He has more than 12 years of solar and clean tech experience and is now the visionary behind Omnidian’s proprietary analytical platform.

When asked what is next for Omnidian, Kenny kept his response simple: “growth, growth, growth.” Unfortunately, that is where simplicity seems to end. As solar technology moves forward on the innovation adoption curve, solar assets have a wider variety of owners and an increasing scale of stakeholders. Luckily, data analytics is capable of informing, educating, and empowering many different audiences. Homeowners are, for example, “interested in having confidence the asset is working. They don’t want to worry about it. So, it is almost more like reporting and transparency: things like technology to support a portal for the stakeholder to interact with the production data in the service history, or proactive reporting that goes out once a quarter in the mail or via an email, to say, here’s how your asset’s behaving.”

For institutional stakeholders, this data becomes even more granular:

On the institutional owner and corporate side, you basically take all of that and just ratchet up the level of interest, and attention, and oversight, and start to do things like more frequent reporting, visibility into open service tickets, production history at more temporal granularity. So, instead of monthly production reports, now you’re all the way down to hourly production reports. And ultimately, those developers and capital partners are then refactoring a lot of the information and sharing it with their constituents. So, understanding how your client is going to receive and use that reporting is valuable because now you can start to chip away at their cost structure and get rid of some of that additional translation, to produce something that can be passed all the way through.

When stakeholders can understand and respond to these insights, the industry can better reduce inefficiencies and change expectations. Eyman brought up one example: “I find that I’m constantly telling owners that sites are going to need more maintenance than they really want to believe. And no matter how many times I tell them, we always end up contracting for less than they are going to need. Later, when we’ve got this big corrective maintenance bill that’s beyond what they thought they were going to need, then they’re upset.” The hope is that as more reporting exists to support or refine baseline assumptions, owners can better anticipate not just O&M costs, but all potential expenses and their associated risks.

Data help not just humans make better decisions, but also machines. One of the exciting ways that Omnidian uses data is in their artificial intelligence software, which identifies performance issues that a human might miss across a large portfolio.

Kenny explained the two-prong approach Omnidian uses: “There are two basic topologies to a strategy or an approach to monitoring an issue detection. One topology is to rely on notifications from individual components. So, you’ve got a bunch of components on-site, think of a big commercial site with a bunch of string inverters. Those string inverters are intelligent components and have the idea of operational health. They can send a signal back through the monitoring platform to say, ‘I’m broken in some way.’ So, one topology is to gather all of those component notifications, organize them, prioritize them, filter out the noise, because there’s a lot of noise in that signal set, and react to it. The second topology, which is what I was describing earlier, is to build up an independent concept of how the asset should be behaving in the form of just kilowatt hours. Given everything on site, the physical components, the orientation, the design, the actual weather… how much energy should that system have produced?

Then you can compare the actual production to expectation and derive insight. Some folks wrestle with those two topologies and invest in one or the other. Our approach leverages both, although we see more value in the latter.”

Once the system identifies an issue, it can also help predict a root cause and suggest a follow-up action for a human user. Sometimes this response is to ignore the alert, prompt outreach to a field resource, or create a service ticket. Like the insight from reporting helps stakeholders improve, so too the human service responses will help the artificial intelligence more accurately predict and troubleshoot issues.

When Eyman asked Kenny “What’s the one thing out in the future you really geek out about?” the answer was a little surprising: workflow automation. “If you think about hopping on your phone and searching for a roll of toilet paper with Amazon and buying it, there’s a lot of tech that goes into that. You get the immediate text confirmation your order was received. You get the notification the driver is a few blocks away. You get a text with a photo of the package on your doorstep. All of that is workflow, supported by tech. The frameworks and tools are used in the broader universe, are now becoming available to industries like ours. So, we’re now tapping into Amazon’s workflow platform to do things like begin to automate the workflow response to common types of issues.”

While automation may inspire less awe than artificial intelligence, it could make a significant dent in cost structures. It will also help assets stay in compliance with policy issues such as prevailing wages, which have only grown more complex over time.

Kenny explains, “Tying this back to technology, there’s a big operational decision and workflow when it comes to pairing a known and actionable issue with a resource in the field. That’s complicated. There’s a lot of factors that go into it. This [prevailing wages] will be one of them. There’s an opportunity to leverage technology to facilitate the pairing of work to an appropriate vendor, and then running the compliance and reporting on the back end.”

For Kenny, the solar industry is a perfect candidate for data science solutions, not just because of the type and amount of data available but also because of the market growth, increasing complexity, and changing expectations that will soon surpass human capability. “If you step back and just look at the market through more of a traditional business school lens,” Kenny says, “you’ve got this idea of early adopters, who are the constituents who are eager to adopt new technology. Our industry has sold to that demographic for a long time now. In some markets, some of our larger denser markets, we’re starting to see mass market adoption, which really opens things up in an exciting way because the numbers are bigger, but also in a more demanding way because there’s less tolerance from that demographic for a nascent, growing industry. We’re figuring it out. We have to shift to polished, professional solution delivery platforms that deliver great experiences.”

During their conversation, the power players discussed three contributions that AI and data science is making to solar O&M:

We’d like to thank our Power Players, expert guest David Kenny and host Michael Eyman, for their insightful conversation on solar AI and data science.

SunCast: The Future of Solar: Beyond O&M