Financing the Future of Renewables 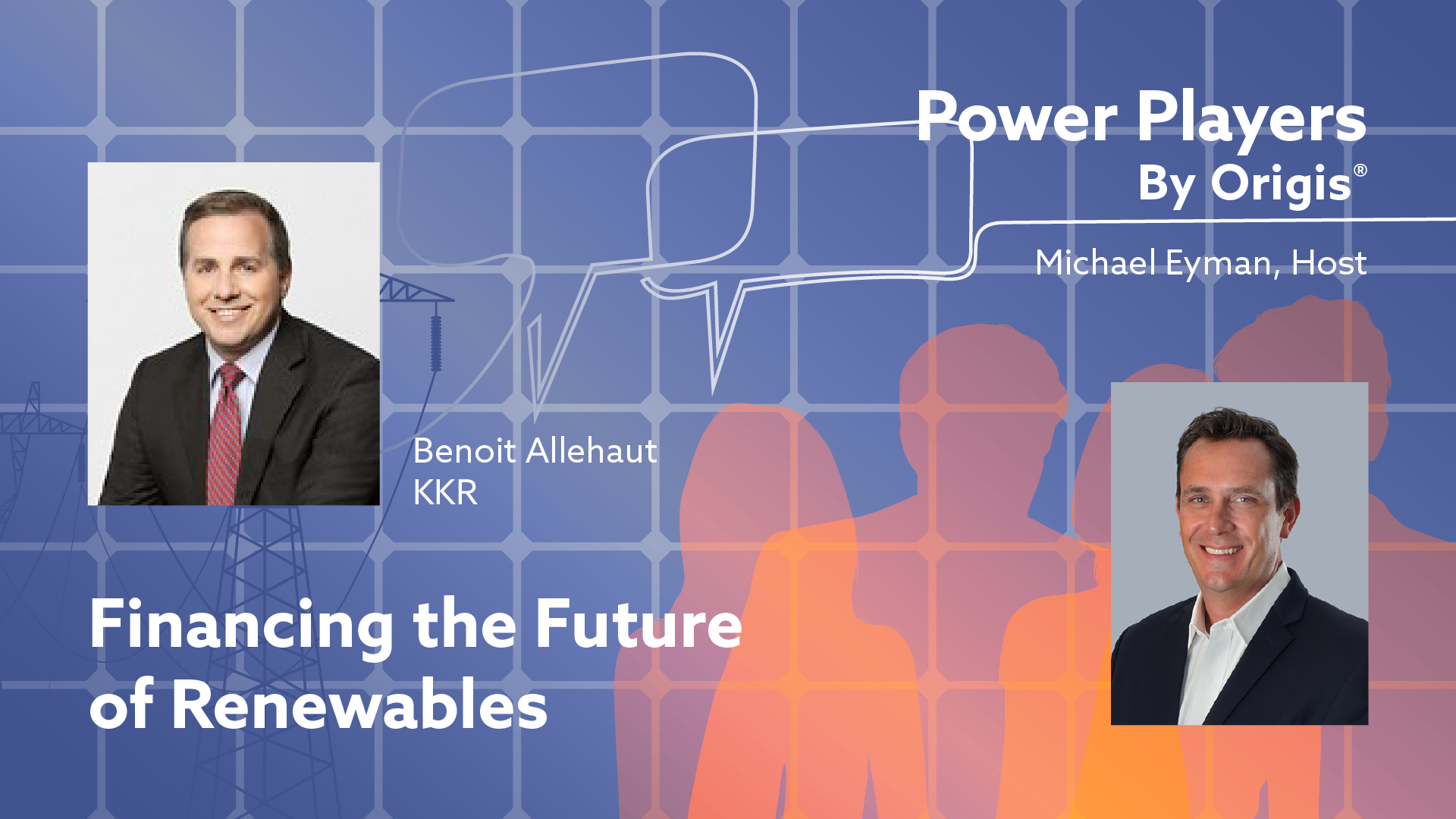 Renewable energy investors and asset owners are navigating a swiftly changing landscape of system evolution (solar and BESS facilities). Financing and revenue models aligned with these systems are also advancing. In episode #4 of Power Players by Origis, Origis Services Managing Director Michael Eyman talks with one of the industry’s most knowledgeable investors, KKR Managing Director Benoit Allehaut, to get a bird’s eye view of the emerging strategies to fund clean energy infrastructure, new storage-based revenue streams, and insights into how operators and asset managers can best support the future of renewables.

Although Benoit Allehaut recently joined KKR as Managing Director and member of the infrastructure team, he has worked in the power industry for more than 20 years and specializes in renewable energy. Before joining KKR, Benoit spent eight and a half years at Capital Dynamics, where he co-led investments in renewable energy and energy storage projects. An expert in project development, regulatory affairs, and financing, he has worked for companies such as EDF, Enron, GE, First Solar, and BlackRock.

INVESTING IN A CHANGING WORLD

Shorter PPA terms. Long merchant or commercial tails. Solar plus energy storage. Reactive power. Complex hedging. Renewable energy portfolios are not just growing in size, but also in complexity. How do these emerging projects get financing? Michael Eyman shoots the question to our financial guest expert: “How are you going to deal with those [complex deals]? Because the traditional financing wasn’t really set up to do that. So, where’s it going and how do you skate to where the puck is going?”

The financial standard is still the same. According to Allehaut, even in complex scenarios, “if a project has really good fundamentals, it will find investors to back it up.” When asked what exactly “good fundamentals” means, Allehaut focused on long-term cash flows and risk: “[W]hen a project gets delivered to somebody who will be the asset manager, what I refer to as good fundamentals is really understanding things that you could control, where you did the work in reducing the uncertainty, or at least understanding the level of uncertainty.”

Being able to recognize those good fundamentals, however, requires a greater depth of expertise: “[W]hat we’re seeing is more and more specialized expertise in bringing investors who understand the asset class. And it’s not just the type of PPAs, but it’s the market dynamics in which a PPA sit.”

It’s a tall order, and Allehaut acknowledges that finding analysts and consultants with not only the financial and market knowledge but also the hands-on understanding of emerging technology is very challenging. “[I]t really comes down to being able to assemble a team of people who can read beyond the confidential information memorandum and really to the best of their ability make more informed judgment calls around the projected performance of an asset than simply rush into what seems to be standardized information, when it’s never standardized.”

Every project carries a certain amount of this uncertainty and yet, as Eyman has noticed, off-takers are expecting greater and greater levels of guaranteed energy: “I’ve seen a number of PPAs in the last four or five years, where the utilities are wanting guaranteed power regardless of weather and the owners are taking the weather risk. And when you’re dealing with a product that produces power from sunlight, you know, weather risk is a real-world, day-to-day, unmanageable reality. . . . Why are the utilities doing that? How are you guys looking at those projects?”

Allehaut’s response is so insightful it’s worth reading more fully:

I think your question is fascinating because it’s at the heart of a revolution that is happening right now. And let me expand on this. Historically, you had a thermal industry that was basically guaranteeing dispatch. Then came along wind, which was very intermittent, knowingly intermittent. And it was take-or-pay contracts. Then came solar and people started looking at solar and saying, ‘Well, hold on a second, the profile of production is far more predictable than wind.’

So, you have that temptation to start shaping or guaranteeing irrespective of weather. And I genuinely believe that that’s where the industry is going. . . . And one of the most interesting aspects is if you talk to co-ops that are buying power, and it’s a huge chunk of the market, they don’t generally buy unit contingent PPAs. They buy blocks. So, this is what they’re used to, they buy blocks. So, if the solar industry, the wind industry, and the renewable energy industry at large doesn’t start to talk about blocks as opposed to intermittency, there’s going to be a problem.

What exactly is a block? It’s that guaranteed power that Michael Eyman mentioned in his question. And while operators and asset managers can’t control the weather, developers and long-term owners should pursue two vital resources to enable energy blocks. First, energy storage, which has become a key component in most new projects. As Allehaut mentions in the conversation, “75% of PPAs that are bid in the west are hybrid projects. So, if you don’t understand storage, you have a problem.” Second, an energy manager who understands the market and can buy or sell energy to meet the fixed volume. Allehaut summarizes the renewable formula for the future: “[I]t’s really becoming wind, solar, plus storage, plus energy management, equals a product that is much more quantifiable for the off-taker, being a co-op, a muni, or a utility.”

YOU GET WHAT YOU PAY FOR

If this sounds expensive, you’re not alone. As Michael Eyman asks, “PPA rates are going to have to come up. How does that happen in a competitive marketplace?”

The recent growth in renewables has frequently been a bidding race to the bottom. Panel prices have fallen dramatically. Interest rates have also decreased. It’s frustrating but not surprising that all other costs are expected to go down, too. Allehaut believes, however, that a shift in the industry is happening based on changes in the global supply chain and the learned experience of operating assets at scale. “I try to be a student of history. And what I see is that for years and years and years prices have gone down. . . . What we’re seeing today is a reversal of that trend. Interest rates are going up. EPC availability is a real problem. You have steel tariff, aluminum tariff, solar panel tariff, border disputes with a withhold release order, etc.”

The consequences of underpricing are also becoming clear. The industry has seen technology partners such as inverter manufacturers exit the market, leaving many assets without crucial service and expertise. Major insurance losses on some projects have forced all others to pay. Chronic asset underperformance and unrealistic projections have forced many PPA renegotiations. Allehaut believes a major part of the issue is the financial industry’s reliance on third-party consultants, who are incentivized to make the numbers work but may not have the expertise to appropriately set forecasts.

While the analyst problem isn’t changing, Allehaut is optimistic for a solution: “[M]y hope is that off-takers do provide some differentiation in pricing based on who’s going to be the owner. . . . I think that’s where the solution comes from. It’s really having off-taker caring about who’s going to be the long-term owner, and then deciding, ‘Okay, I want to have a tier-one owner. But it’s your job as a tier-one owner to tell me that what’s in the box is the right one.’ “

To protect the financial future of renewable energy, we must all be students of history and learn from its recent growth. The experts agree, there is not enough pricing differentiation between quality technology, services, and financial structures. For developers and off-takers interested in more reliable solar assets, here are the three major takeaways from episode #4 of Power Players by Origis: